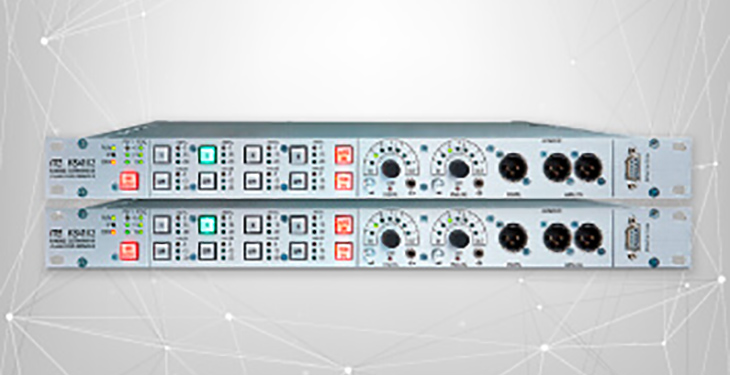 The KS41x2 audio switch was designed to be installed in radio broadcast transmitter stations, where it is used to switch one of four incoming radio programmes to the transmitter. The audio signals received are monitored, and if a level lies outside pre-programmed lower or upper limits, the equipment automatically switches another of three preprogrammable signals to the transmitter.

The two 4 x 1 switches work in parallel. The three analogue, resp. AES/EBU outputs are isolated from each other by distribution amplifiers. The input signals are monitored by level monitoring circuits with adjustable upper and lower level thresholds. If an input signal is outside one of the level limits for longer than a selectable time, the KS41x2 switch switches to another selectable input signal (back up). If the main signal is back again inside the level limits during another pre-programmable time, the KS41x2 switch switches back to the main signal after a configurable time. In case of a power failure, built-in relays connect the first analogue input signal to the analogue outputs, and it also connects the first AES/EBU input signal to the AES/EBU outputs.

The audio switch is managed by a built-in processor that establishes the control interfaces with the external world, inclusive of SNMP. The level monitoring circuits are configured (setting of the level thresholds and times) by means of a PC that uses an internal configuration software.

The switch is controlled in four ways:

The state of the switch is signalled in three ways:

By LEDs in the push buttons of the front plate

A Swisss quality trademark, with a long traditional experience, always open to the needs of the future.

Look at the list of our applications and find the one that is just perfect for you!
Analyze our project, already offered to our Customers who trust Mandozzi.

Go to the Apps