(Intercom module to be integrated into a SERIX system) 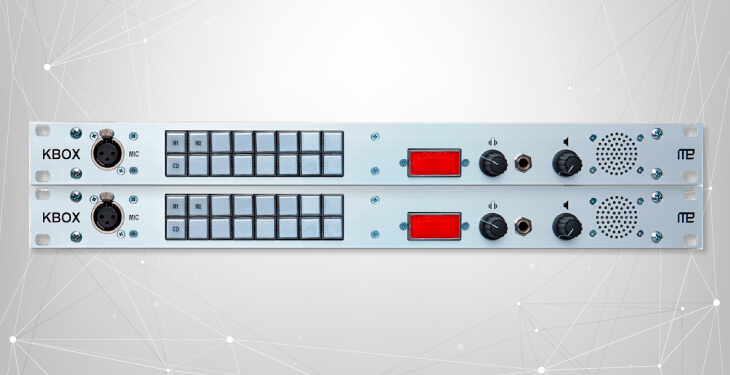 The KBOX - Serix is a module that offers communication, monitoring and GPIO functions for radio studio applications where Mandozzi mixers and/or matrices are in use. It can either work as integral part of a SERIX mixer or in a stand alone manner.

The box has a built in microphone pre-amplifier and a loudspeaker. It gets its power from an external 12 VDC plug in power supply unit. The control panel is equipped with a keyboard that contains 16 keys plus a larger key for special purposes. The keys have built-in red, blue and yellow LEDs. The functions of every key can be configured by the user in a very easy way, either on the SERIX touch screen or on the matrix supervisor PC.

The audio signals are transmitted to and from the KBOX via a standard AES/EBU connection. Although the built-in loudspeaker only allows mono monitoring, it is possible to connect to the KBOX two external loudspeakers for stereo monitoring.

The control panel offers a 6.3 mm Jack connector for a stereo headphone. The level of the headphones and the one of the built-in loudspeaker can be adjusted by two separate potentiometers. By means of an internal jumper, the user can define whether the loudspeaker shall be muted when a headphone is connected to the KBOX or not.

A “Line IN” connector can be used to input an external audio signal that can be listened at the loudspeaker or the headphones. This signal is internally mixed with the left channel of the audio signal received via the AES/EBU connection.

The control signals are transmitted via IP.

If the KBOX is part of a SERIX mixer, the AES/EBU cable has to be connected to the corresponding concentrator, whereas the CAT5 cable will be connected to a LAN switch of the SERIX.

If the KBOX has to operate independently of a mixer, the AES/EBU cable will be connected to the IDEA matrix or one of its concentrators, and the CAT5 cable to a LAN switch of the IDEA system. If the KBOX is connected to the customer’s LAN, this LAN has to be isolated from the internal IDEA LAN by an interface PC.

The KBOX has four integrated GPIO. The input opto-couplers and the output relays are connected to two separate 9pole SubD connectors at the rear of the module. The GPI signals are transmitted via IP to the SERIX processor PCIMIX, resp. the matrix processor SELP.

The GPO signals are generated upon commands received via IP from one of the two processors mentioned.

Depending on the application, the customer can choose from two different mechanical realizations for the KBOX:

the first version allows the module to be inserted into the surface of a mixer console or to be built into a table top housing;

the second one is a 19" 1 RU box to be installed into an equipment cabinet. Both versions offer the same functionalities

A Swisss quality trademark, with a long traditional experience, always open to the needs of the future.

Look at the list of our applications and find the one that is just perfect for you!
Analyze our project, already offered to our Customers who trust Mandozzi.

Go to the Apps